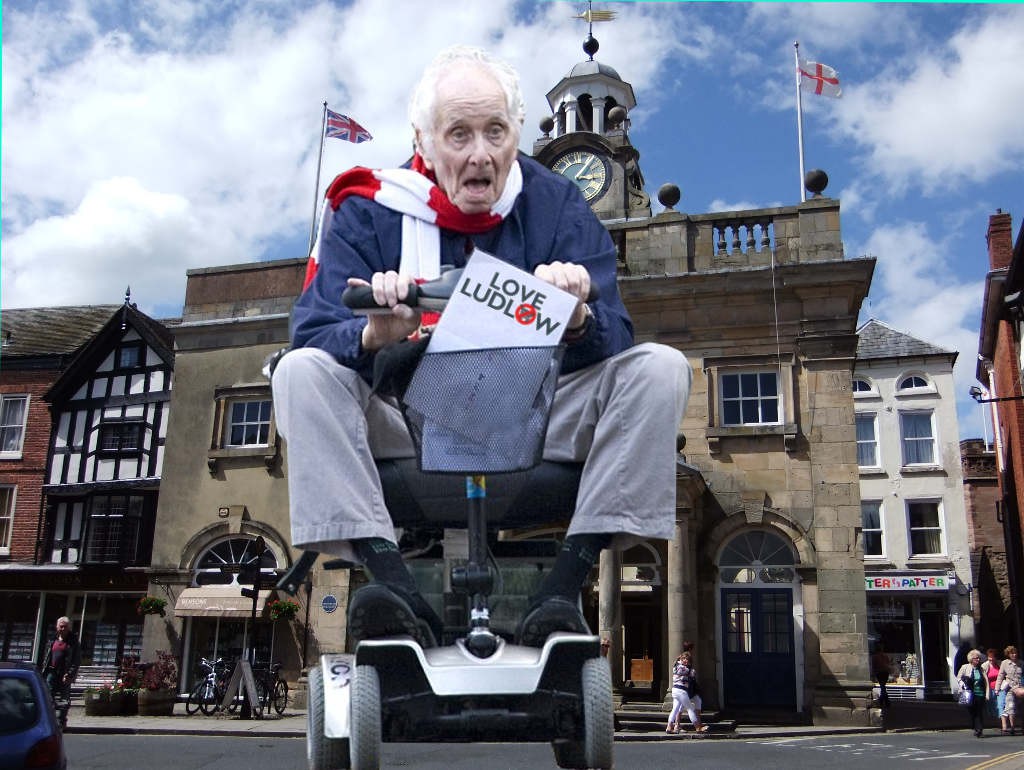 No surprise, plans for a new supermarket at Rocks Green Ludlow are polarising townsfolk into two distinct camps. With little common ground to be found between the two.  [1]

This is a straight bun-fight between the progressives from the suburbs, and the dinosaurs of Ludlow Old Town.

The humble folk from the hinterlands yearning for just a little more choice and better economy to their modest weekly shop. Versus the knuckle-dragging neanderthals of Ye Olde Ludlowe Towne who reject any and all ‘change’ as a filthy word, goddamnit!

What we have here is a noisy and noxious army of musty old relics; angry old dragons trapped mentally within the medieval town walls.  Breathing fire on progress of every shape and form.   A wheezing and whooping zimmer-framed generation wedded to the shopping habits of a bygone day. And Be Cursed!, they warn, to any seeking more!

Starkly contrast that decrepit old bunch with their vibrant young neighbours: poor but proud young families in and around this town.

TINY VOICE OF REASON FROM THE WILDERNESS  [2]

Bright-eyed and bushy-tailed; youthfully embracing progress in this deprived rural district; moving harmoniously with our times; seeking a better future for us all. Hear their heart-felt pleas for a modern new supermarket, to meet the modern shopping needs of today’s modern family.

You’d think that between those two camps, this supermarket slug-fest would have been ruled a ‘no contest‘ long long ago; thrashed out months back to greatly benefit the wider masses. But, alas, within the old town walls of Ludlow is where we still find the influence, and affluence, in our rotten borough today.

Ludlow, the painfully awkward town-within-a-town. Controlled by a snooty shower of bombastic and bumptious incomers. An obnoxious cabal of pompous retirees drawn to Ludlow by its infamous Snob Factor.

This is a town for boasting openly of having a different missus mop for every day of the week. And, as usual, the cabal’s hidden civic power wielded through the usual terrible troika  (the Tory Party; the Brotherhood; and the Church.)

A town run by modern-day anachronisms. Bursting with human absurdities. The Charles Pooters from Victorian England polluting our civic life, to this very day. An angry land army of real-life Hyacinth Bouquets selfishly fashioning our town to their own exclusive liking. Sanctimonious old toads imposing their will and their wants on the gentle native folk.

MUTTERINGS OF A MUSTY OLD RELIC

We’ve all crossed their paths and regretted it. Leaping aside as they thunder by on their electric trolleys, barging arrogantly along our narrow town streets; pounding our pavements in their ludicrous plus-fours; bee-lining between their hoity-toity luncheons at The Feathers Hotel; copious cognacs in the Conservative Club; monocles in, and eyes down, mopping-up their daily dose of snobbery from their Torygraphs.   Before a well-earned snooze ready for Afternoon Tea at De Grey’s.   Thence to the Assembly Rooms for the week’s captivating lecture. Where Sir Humphrey will indulge them all with a riveting talk on The Churchill Papers. Quite fascinating, no doubt!  Yawn!   And, finally, so to bed. Another busy day indeed for the fossilised relics of Old Ludlow town.

As true Ludlovians, why do we put up with this nonsense?

Why tolerate these daft old duffers dictating the future of our town for decades to come?

This town is long overdue a nice new supermarket; we must settle for no less!

1 thought on “SUPERMARKET SLUGFEST — snobbery in the hotseat”