Flights from London Heathrow to Kuala Lumpur take a gruelling 13 hours and cover a staggering 3,597 miles.  Our intrepid MP Philip Dunne knows that only too well.

Reportedly back in April, the globe-trotting minister jetted off to Malaysia, for a cuppa and a chat with the country’s Prime Minister Najib Razak.    There’s even a photo to prove it.   A photo.  Singular.  Just the one. Which Mr Dunne proudly tweeted out to his fanbois.   Here it is below;  Prime Minister Razak to the left, and War Minister Dunne, of course, to the right: 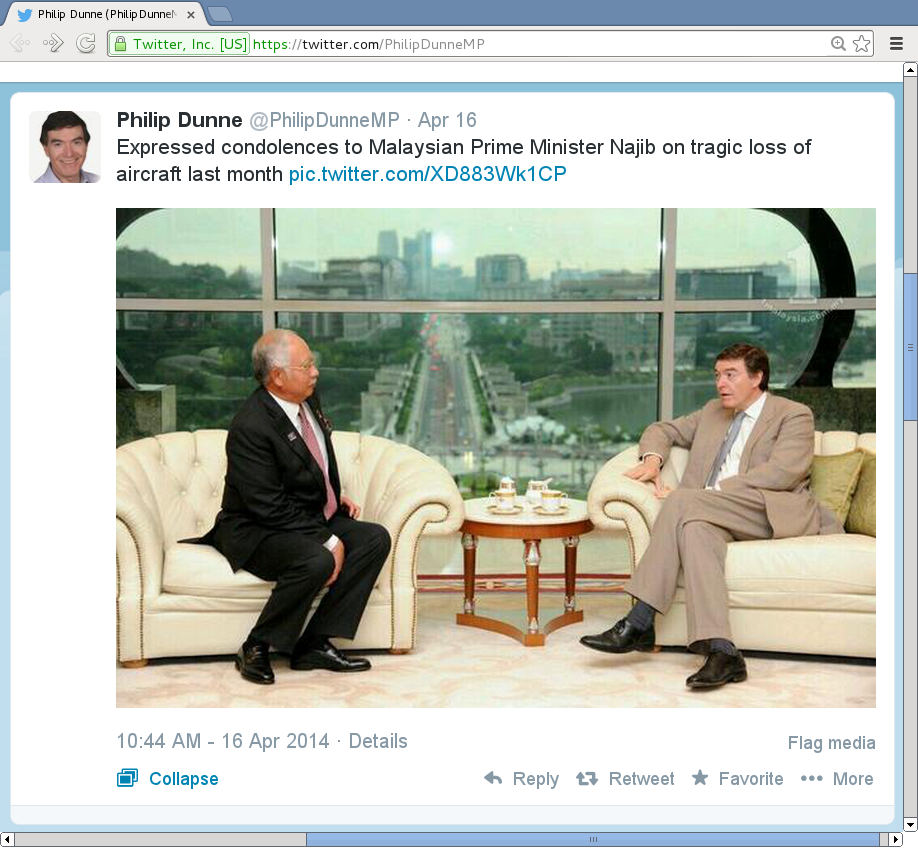 Folks, take a good look at that “photo”.   Study the furniture – the settees, that little table – the china on it,  and the window and cityscape beyond. 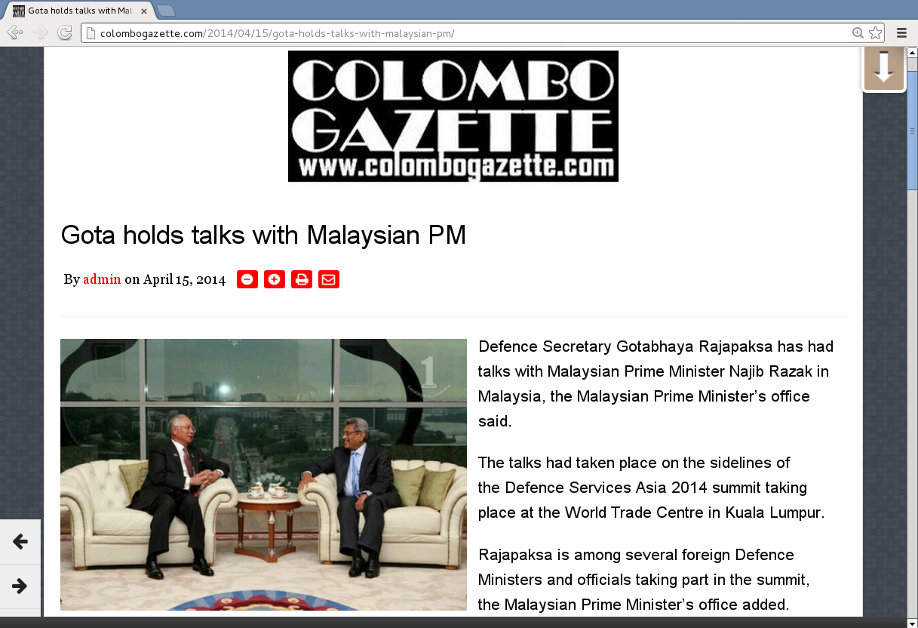 Now let’s overlay those two images, to see what we find:

EDIT:  It has been suggested that the rising/falling skyline is explained by the cameraman (if there was one) taking a different position in the two images.    An expert at cluesforum.info agrees that this is a theoretical possibility; but he wasn’t going to be drawn – “it’s just not clearly evident one way or the other (to me).”

In Mr Dunne’s favour, three more “photos” have surfaced, purportedly showing him somewhere in Malaysia, where he’d reportedly travelled to attend the Defence Services Asia 2014 Forum in Putrajaya.  That’s not to say Mr Dunne wasn’t in Putrajaya for that Arms Fair;  suspicions here are limited to the first “photograph” above, apparently showing him with the Malaysian PM.    And do believe,  there is form for photo-shoppery!

The narrative in its entirety is dubious.  According to Jane’s Defence Weekly  (the in-house magazine at the M.O.D.),  Mr Dunne has been milking the alleged disappearance of Malaysia Airlines MH370, a few weeks earlier. Using it to promote British-developed equipment for tracking and surveillance of commercial airliners.  [1]     Indeed, Inmarsat of Old Street London announced just this week that, in light of the mysterious vanishing of MH370, they will be offering ‘free’  “satellite” tracking to all long-haul carriers. [2]

The MH370 story is in itself highly dubious. See here [3]. And for the skeptical star-gazers among us, the idea of tracking airborne vehicles using telecommunication “satellites” seems even more far-fetched.  See here.  [4]   Nevertheless, there’s a lot of money at stake.

Back to the imagery of Dunne though.   What strikes as especially odd is that we can find just two images in this particular setting.  Shouldn’t we expect to find many similar photos? Especially as there were reportedly countless other foreign dignitaries in Malaysia for that Arms Fair?  Wouldn’t it have been rather rude for the Malaysian PM to invite just the British and Sri Lankan defence ministers into his office, for formal photos?   What of all the other defence chiefs left out in the cold?  Not exactly diplomatic; it could have started a war!  Perhaps that was the idea?!  Kerr-ching!

Seriously, though, why don’t we have dozens of virtually identical pictures showing umpteen foreign (and domestic) dignitaries in the exact same setting with the Malaysian PM?  Looking out from his office onto that impressive vista of the Putra Bridge and downtown Putrajaya?   Or why didn’t the Malaysia PM meet all the visiting defence chiefs at the Arms Fair, held in the Putra World Trade Center?  A lot simpler, surely?

A bit more background on the two “photos” above. They were supposedly taken from the central semi-circular window of the Perdana Putra, the magnificent building below.

The Perdana Putra – the Office of Malaysian Prime Minister in Putrajaya

It’s perhaps prudent  to exercise caution here, and file this one under “suspicious”, rather than under the heading of “glaring fake”, as was the earlier case with the “faux-tograph” of Dunne and NA$A ass-tro-not Buzz Aldrin!  (google it!)