They often say that a picture is worth a thousand words. But some piccies can be priceless. Take, for example, Lord Hill’s Column, and the close-up “photos” of it. How much are they worth? Millions of pounds in the years to come? Ridiculous? Read on!

Standing 133 feet 6 inches tall, the statue of Lord Hill towers over Abbey Foregate, Shrewsbury, where he casts his all-seeing eye on the shenanigans in nearby Shirehall.

Lord Rowland Hill was famous for commanding the troops at Waterloo; the decisive battle in the Napoleonic Wars.

In 1819, with pint-sized Emperor Napoleon safely banished by the English to the island of Saint Helena, county Freemasons erected a monument to their war hero Lord Hill, and, voilà, here he is:

Nearly two centuries later, though, and Lord Rowlie ain’t looking so good. At least, that’s what the “photos” of him seem to be telling us. [1]

And guess who’s to pay for all this? Yup, that’s right: us!    We – the cash-strapped county taxpayers!

That’s the narrative, folks, but before we tease open our wallets to bankroll those bumper repair bills, hadn’t we better check the damage for ourselves?

Since Hill has his head high in the clouds, and is enshrouded (fortuitously) of late in scaffold, we must rely on others’ imagery of his supposed damage.   Here’s the clearest close-up picture of Lord Hill. It was published 30 April in the Shropshire Star. [2]

The BBC attributes the “photo” to Taylor Pearce Restoration Services Ltd of Lewisham, the conservation specialists who were commissioned 2013 by Shropshire Council to inspect and repair the lofty monument. [3]

So let’s give their image the forensic once-over, folks!   What can we deduce about it? —-

Well, the “photo” bears those tell-tale signs of a composite fake; a composition of several images bodged together! Fancy that!

Note, firstly, the extraordinary depth-of-field to the image focus. Lord Hill is just a few metres from the camera, and in clear focus. And yet Shirehall and houses many hundreds of metres beyond are ALSO in clear focus! Some camera lens! An incredible optical anomaly? Or our first clue yet of composite fraud? A photo fake in which a war-torn Hill is pasted digitally onto a separate background? [4]

Now note the SHARP focus to the houses on the LEFT, and then note the BLURRED houses and cars to the RIGHT. Those two areas are about the same distance from the camera and should have the same clarity of focus. But they don’t. That’s another hallmark of a Composite Fake. Could two or more images have been cobbled together to form the background? More proof of a cut-and-shut scam?

Now note the semi-transparent wavy lines, quirky compression artefacts, that run parallel to the “cracks” on Hill. Evidence again of Photoshop skullduggery? We shall see.

The image is a JPEG. That’s an image standard which uses lossy digital compression to reduce file size. Every time a JPEG image is saved, compression is applied uniformly. When a genuine photograph is stored as a JPEG, all areas of the image should remain at a similar compression level. 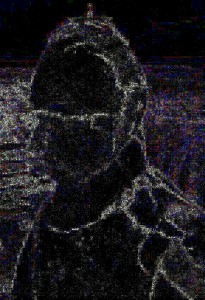 One technique in Image Forensic Analysis is to shift the image entropy back to the frequency domain, to visually identify any compression abnormalities. Using an online tool called fotoforensics.com, that’s what we’ll do. It highlights the variations (errors) in the compression levels of an image. The technique is called Error Level Analysis. [5]

This is what Error Level Analysis shows us: [6]

As mentioned above, those two areas of background – left and right of Lord Hill – are now obvious as composites. The left area is at a lower compression level (finer detail) than the area to the right. It looks like a fake, guys!

And the “cracks” on Rowlie are at a much lower compression level than Rowlie himself. Indicating that the “cracks” are artificial digital additions. The cracks too are fabrications?! Cooked up with image manipulation software (eg Adobe Photoshop) for maximum visual effect?! Why fake it though?    Maybe because head-honcho at Shirehall, Keith Barrow, is on the brink of signing a multi-million pound contract for the repair and maintenance, or even the entire replacement of this ghastly effigy!

And, as my late Aunt Olga from the Upper Volga used to say:

She’s right! The worse condition the statue appears to be in, the bigger the repair bill!